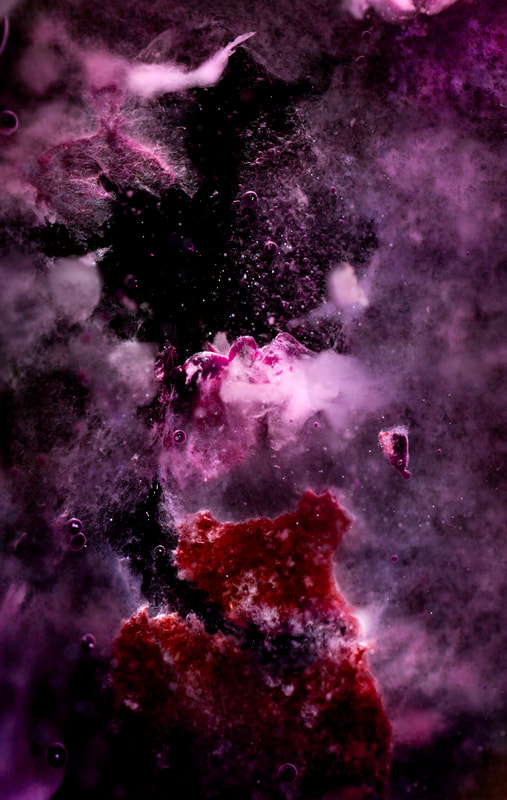 Crab Nebula #2, 2019 imagines a future sea transformed by warming seas and algae blooms as we enter the Anthropocene. The title comes from the resemblance to a telescopic vision of the Crab Nebula - a remnant of a historical supernova explosion in 1054 AD observed by chinese astronomers in the constellation of Taurus. The work is inspired by the words of Giacometti ‘The object of Art is not to reproduce reality but to create a reality of the same intensity’ 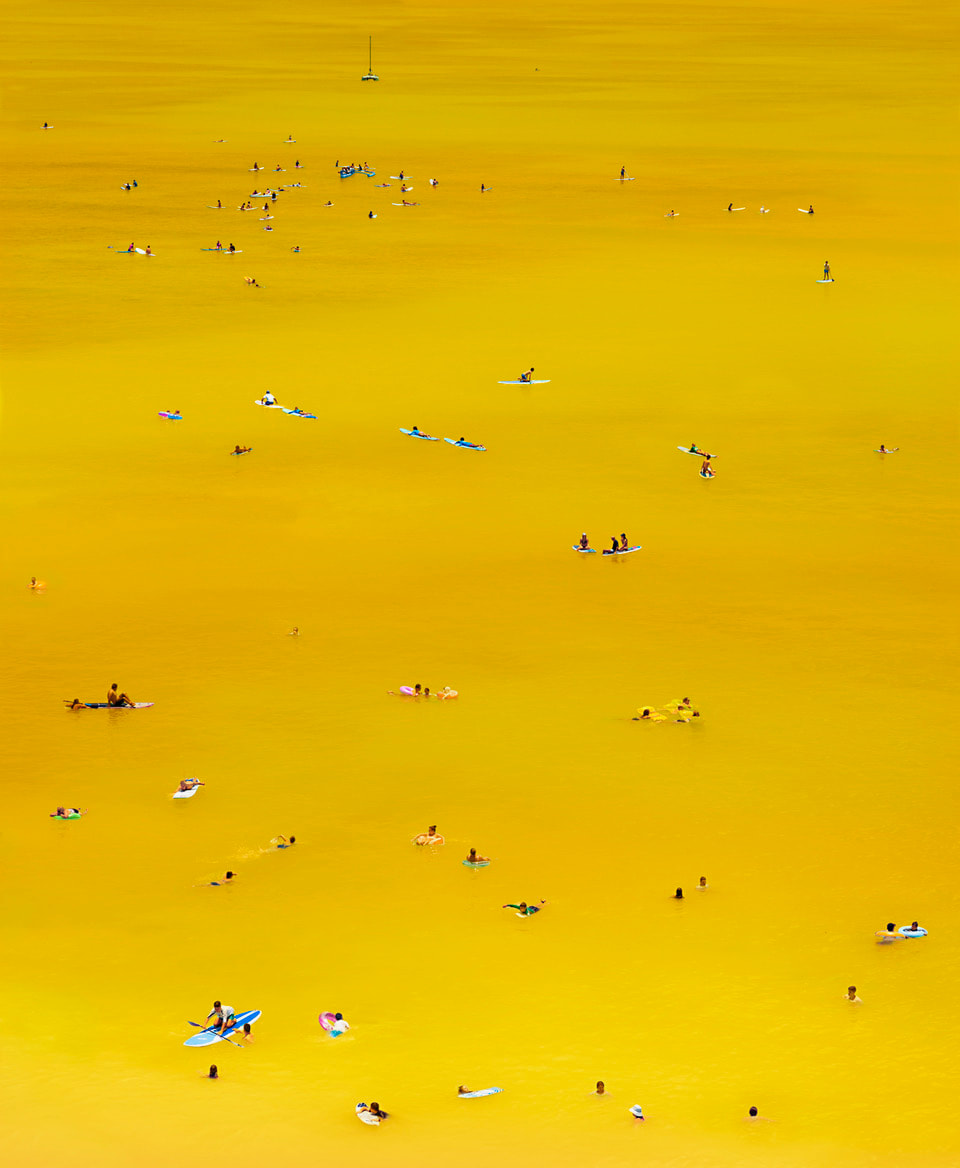 Infra_Moana, explores the sea, our familiar playground, as a ‘future sea’ further into the Anthropocene. It plays on the concept of infrared photography which captures levels of heat. Infra-Moana provides an imaginary opportunity to see the warming of the seas using yellow as a symbol of warmth. The work also references the increasing occurrence of algae blooms as the seas warm up. This turns the water red, green or yellow. Some algal blooms are the result of an excess of nutrients (particularly phosphorus and nitrogen) which cause an increase in the growth of algae and green plants. As this organic matter dies it becomes food for bacteria that decompose it. With more food available, the bacteria increase in number and use up the dissolved oxygen in the water killing many fish and aquatic insects. This results in a dead area in seas or lakes. This work was in part inspired by a report from Qingdao, China, in 2013, about a massive algae bloom attracting beach goers. People flocked to the beach to play in the water transformed by the algae bloom. News reports included photographs of people swimming and playing on 'floaties' within this thick green algae which covered a record breaking 28,900 sq km. In this work, like apocryphal ‘frogs in a bathtub’, humans go about their leisure, or current behaviour, seemingly unaware of their authorship of future reality, including significant impacts upon our environment.
Ariel # 3, 2016
Finalist Walker and Hall Waiheke Art Awards 2016

Walker & Hall Waiheke Art Award Judge notes Monique Jansen :
​
'Cathy Carter’s Ariel #3, is a photo of a disorienting landscape, which collapses perspective and tips you through a body of water. It creates a kind of turbulent ecstasy that is sublime. It is both otherworldly and completely of the world.'
​
Portals of Bare Attention is a series that further explore bodies of water as physical, cultural and social ‘landscapes’.
This series looks at  different perspectives to create new ways of experiencing the ocean.
As Susan Sontag has said “the painter constructs the photographer discloses”.
The work was made from images captured in the Hawaiian islands, in the middle of the Pacific Ocean.
The circle which encloses this work is used to represent the infinite nature of the energy of the ocean.
Hawaiians believe the circle is a symbol of a life with no beginning or end, and with the environmental challenges facing our oceans
the circle also acts as an emblem of protection.
The first 3 works were titled Ariel. This is a play on the word ‘aerial’ and a reference to Ariel from Shakespeares play The Tempest.
Ariel is a sprite who is responsible for carrying out a command from Prospero to shipwreck the King of Naples and his crew in a violent tempest. 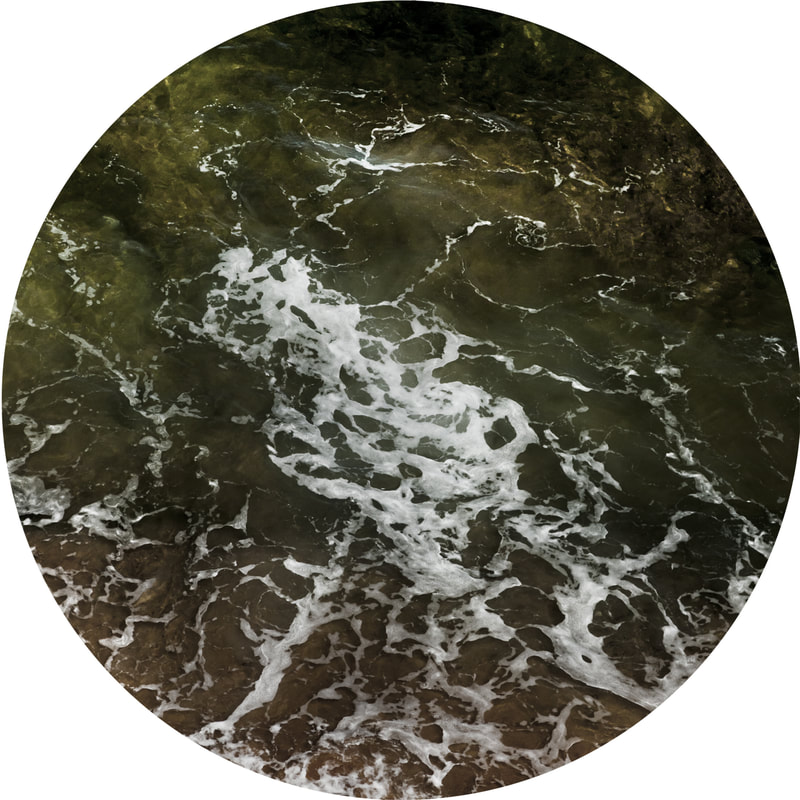 Finalist Walker and Hall Waiheke Art Awards 2016
This work is an homage to David Hockney’s swimming pools and the joy he expressed through his work of plunging into water with its resulting splash. As someone born into the 1960’s it’s impossible for me to observe the reflected graphic lines of light on the bottom of the pool without referencing Hockney’s iconic pool works. Sunlight on a pool allows a very different exploration of light, than that of open waters. In contrast to Hockney’s works, these works ‘Poolside: Immersion Emergence’ have, ironically, no ‘Poolside’ in which to give the work a social context, and rather than a male friend or lover of Hockney’s, the female diver is anonymous, her form hidden by her immersion and the bubbles. The shadow in the work (rather than being absent as in Hockney’s works) remains and takes on the form, through the distortion of the water, of a mythical sea creature, referencing my ongoing interest in the mystical eco warriors of the oceans, rivers and lakes of the Oceanids. This series ‘Poolside: Immersion Emergence’, continues to use an aerial perspective, used for my Seaside series in which the viewer is positioned as ‘aerial voyeur’, an inherently contemporary, drone-like perspective. This provides a detachment and space to further observe our diverse relationships with water, as well as adding to the unease associated with this technology and the invasion of privacy that this can impose on spaces of intimacy. This work was taken at a domestic swimming pool at a private residence where I could climb onto the roof of the house to be almost directly above the pool. Exploring the swimming pool as a body of water sets up different associations to work like Seaside based in or around open water like the ocean. I am interested in the swimming pool as a human recreational construct, using water to create a space of relaxation, leisure, exercise and visual aesthetic. The swimming pool is an architectural space but it is also a metaphorical space, a communal, family space with elements of escapism and hedonism. I am interested in the swimming pool for its human associations, with childhood, with family, with leisure and relaxation, with affluence, with personal privilege, as a psychological territory as well as a physical space for water. With each photo I work with the concept that what we see isn’t necessarily a true representation of the real world. I’m fascinated by how our human eyes process the visual world. Paul Corballis, a visual cognitive neuroscientist, talks about the world each of us experiences visually, as a personal ‘construction of reality’. Each image in this series is a construction in which I offer a personal experience of what it is I am seeing. Interestingly, it’s not uncommon for viewers to have very visceral response to the work, which speaks to the psychological and mental space that the swimming pool represents, including the very different character of ‘contained water’ compared to open water or natural waterways. 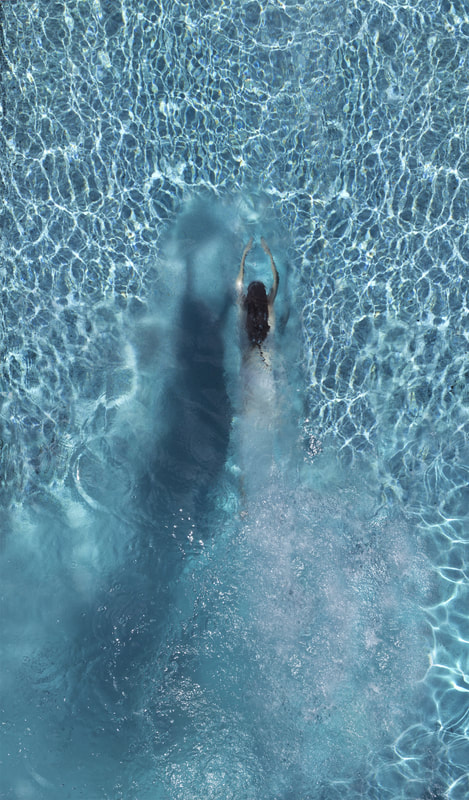