Bondi’s Icebergs pool is re-interpreted metaphysically and literally as an iceberg, adrift at sea. It is a human construction now cut off from the land by the affects of sea level rise accelerated by global warming. The work re-imagines this iconic coastal swimming pool - one of many coastal pools that are a feature of NSW, having morphed through global warming in the Anthropocene into an isolated playground or watery oasis. This work is part of a continuing series within Carter's practice in which the viewer is positioned as ‘arial voyeur’. This contemporary, drone-like perspective references urban life's growing detachment from nature, both physically and psychologically, in the face of technology’s increasing encroachment on our everyday lives.
To create this work, Carter used digital collaging in photoshop. Time has also been manipulated through the repetition of figures within the photograph to make visual the relativities of time and space. There are many dynamics at play within this sensual space of pleasure and performance. The work examines this space of relaxation, physical exercise but also the absurdity and vulnerability of humanity in the Anthropocene, a time in which, despite all our luxury and progress, we are most at risk from our own collective behaviour

This work, titled ‘Reflecting on Hinengu #2 (under the moon)”, explores the myth of Hinengu daughter of Tangaroa, god of the oceans. In this legend of the Waimarama tribe, Hinengu was a shapeshifter, able to transform, by the light of the golden moon, from her true form as a giant squid into whatever form she chose. This work seeks to reimagine Hinengu as she transforms herself into a beautiful maiden in order to capture the heart of a young man (Rongomaipureora, son of Te Aomatarahi, a famous general of the Kahungunu tribe). The following two works depict moments in Hinengu’s transformation as she emerges from the ocean, and then returns to the sea before daylight, shapeshifting in these moments. Tragically for Hinengu her father Tongaroa found out that she had been consorting with Rongomaipureora and punished her by taking away her power to shape shift, banishing her to the depths of the ocean in her true form as a giant squid. For further information about Hinengu please visit the website of Waimarama Maori Tours or use the link below.
http://www.waimaramamaori.co.nz/stories/te-ana-o-hinegu/ 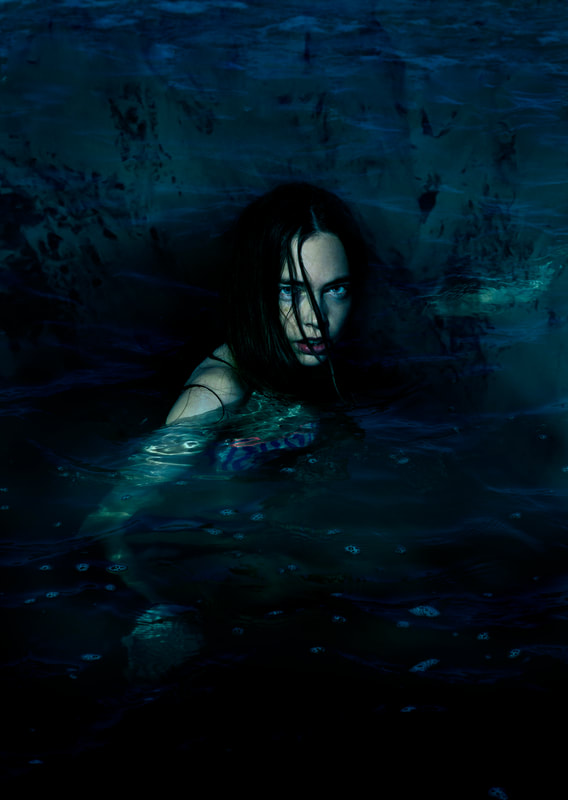 Ophelia # 1, 2014
​Head On Photography Festival, Portrait Finalist, 2016
This portrait of a male Ophelia is inspired by pre Raphaelite painter John Everett Millais’ famous depiction of the drowned Ophelia, Hamlet’s lover from Shakespeare’s tragedy. At the original painting’s debut at the Royal Academy in London in 1852, critics were dismayed. The Times declared that “there must be something strangely perverse in the imagination which sources Ophelia in a weedy ditch, and robs the drowning struggle of that love-lorn maiden of all pathos and beauty”. Carter’s Ophelia is a contemporary young male, semi submerged in a setting as likely to have upset The Times – an alpine bog on Mt Ruapehu in the Tongariro World Heritage Park in the central North Island of Aotearoa / New Zealand. This bog was formed in land planed and hollowed out by glacier ice. This alpine wetland hosts alpine bog cushion (Donatia novae-zelandiae), containing rushes, liverworts, sedges, mosses (including peat-forming Sphagnum) and algae.

Both images were created in winter. Millais’s model the 19 year old Elizabeth Siddell, posed for hours in a tub that was initially warmed by oil lamps underneath it . However when these went out Elizabeth was left lying for hours in freezing cold water resulting in a cold. Thanks to the immediacy of photography 22 yr old art student Ziggy Lever only had to lie in the freezing bog for a few minutes!

In choosing to portray Ophelia as a male, Carter was also referencing the theatrical convention of Shakespeare’s time, namely that he would have written the part of Ophelia to be played by a young boy. Finally, Ophelia is thought to have taken her own life. Aotearoa/ New Zealand ‘has the second highest rate of youth suicide in the OECD and young Maori men continue to be disproportionately represented in statistics”[1]. Just as Ophelia’s departure was shrouded in mystery, very little is understood about why teenage boys and young men take their lives in such numbers, and very little effort has been made to understand this alarming trend. Some psychologists attribute this trend to young males’ perception of how they are seen as males in contemporary culture.
[1] http://www.theguardian.com/world/2015/oct/19/we-have-to-start-talking-about-it-new-zealand-suicide-rates-hit-record-high 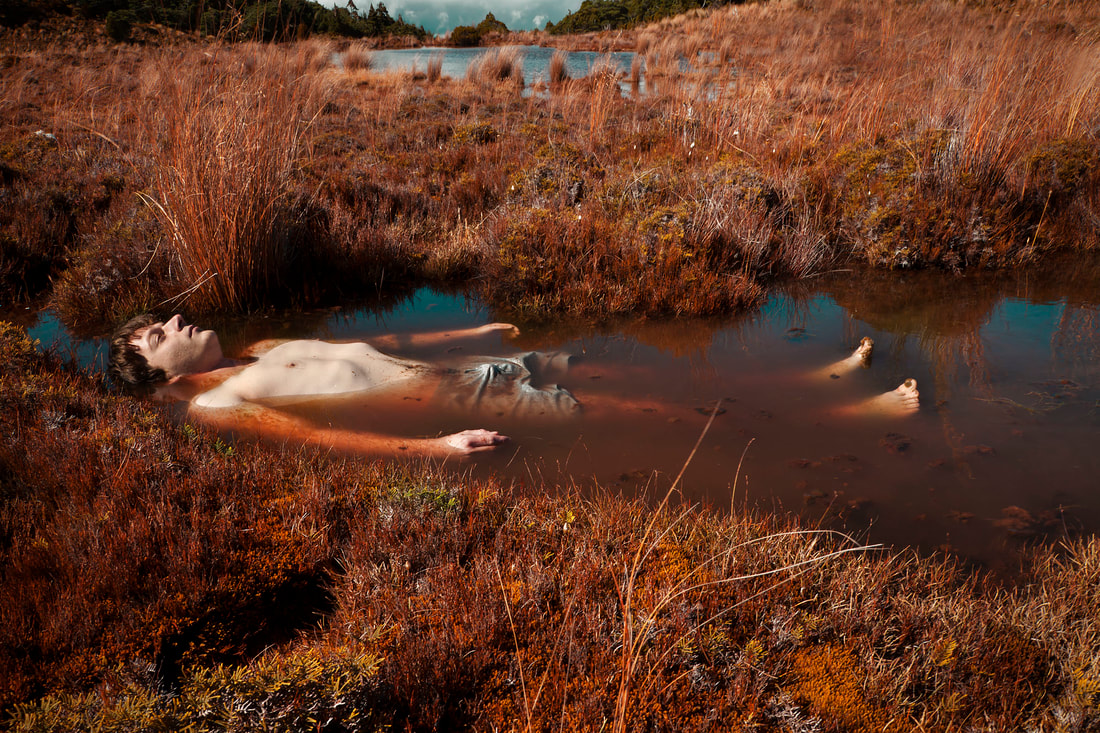 Water, and in particular the ocean, has been a source of inspiration to finding new frames of reference to understand our world caught in ecological crisis. Inspiration for this portrait, stems from the supernatural creatures of Maori legend, the ‘Taniwha'. Some of these were protective guardians, kaitiaki, of their watery habitats, and were depicted as reptile-like sea creatures which could shape shift their form to sharks, whales or dolphins. In Maori mythology, the Taniwha has parallels with the legends of the Greek Oceanids. These are mythological goddesses responsible for protecting the body of water they inhabited, and the creatures that lived there. With the ecological crisis impacting the world’s oceans and waterways, I was interested through the constructed nature of photography to imagine a contemporary representation of these mythical eco warriors. The name Idyia has been taken from an Oceanid whose name was derived from the Greek word to ‘know' or to ‘see’. And in this work relates to the idea that we all see and know to some extent the destructive effects of prevailing consumerist attitudes to the environment and in particular bodies of water. In this work idyia's gaze confronts us to defy her existence and challenges the viewer to take action with her. 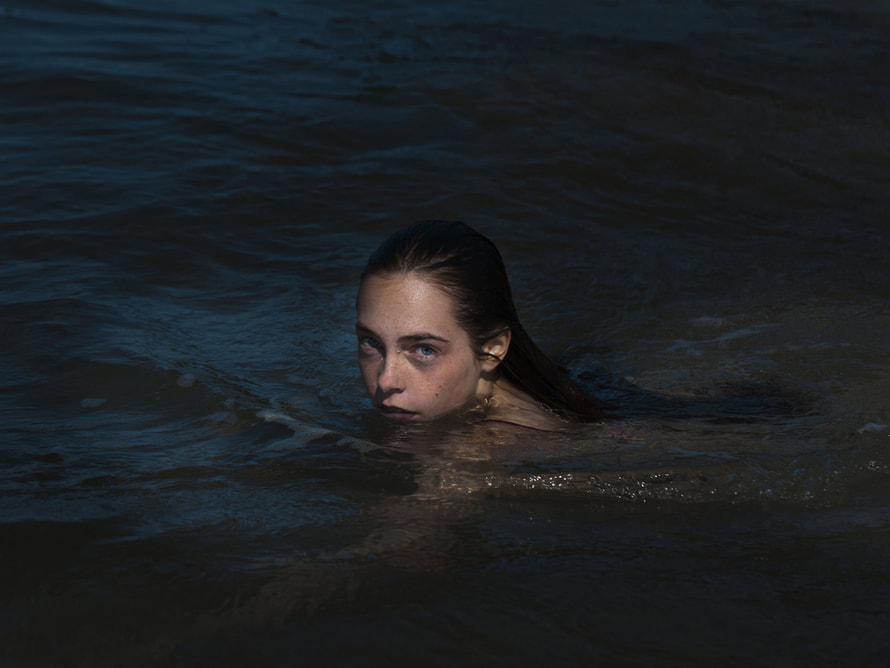